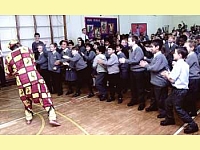 It's a rainy October day in south-west London and the year four and five pupils (aged between seven and nine) at Priory CE primary school are sitting in the gym hall, surrounded by the usual paraphernalia of climbing ladders, ropes and basketball hoops. 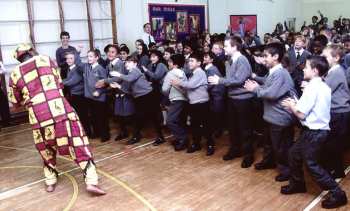 Then suddenly, to the delight of their young audience, the four figures begin to dance, sing and drum out African rhythms.

Some year fours are enlisted to mimic the group's movements; they giggle to their seated friends, who are wriggling and clapping to the music. As the spectacle stops, little arms punch the air and the room fills with cheers.

The creators of this carnival-like atmosphere are members of east London's Iroko Theatre Company, which uses traditional African theatre art to enhance the self- confidence and knowledge of children and young people, including those with special needs. Set up in 1996, the group provides a range of activities in schools, youth centres, hospitals and young offenders' institutes across Britain. Last year, Iroko worked with some 90,000 children and young people, through oral storytelling performances, music and drama workshops. Participants learn about African culture, while storytelling covers topics from team work to racial harmony.

Today's session is part of Priory's celebrations for black history month. Its week-long programme includes a three-day residency by Iroko, which involves children learning about African instruments and hearing traditional folk tales. Alex Oma-Pius, storyteller and artistic director of Iroko, says African theatre arts are a good medium for raising awareness and encouraging learning. "The idea is to enable children and young people from different backgrounds and abilities to understand other arts and cultures," he says. "This helps cement racial harmony which is vital in today's multi-cultural Britain."

The theatre company undertakes in-service training for teaching. This involves Iroko demonstrating its work to teachers, followed by a workshop that focuses on elements of storytelling which are useful for developing children's imagination, language and communication skills. For early years teachers, the activities introduce them to basic counting chants, musical games and movements that can enhance numeracy skills. Iroko's work with primary and secondary school teachers aims to equip them with new ideas for drama, dance and music.

A trained theatre director and actor, Nigerian-born Oma-Pius set up Iroko when funding for a similar project he was involved in was cut. The company's name refers to the eponymous African tree, which provides the wood for its drums and masks. Today, Iroko comprises four core performers (employed on a freelance basis) and a full-time administrator/fundraiser, whose post is funded by a grant from BBC Children in Need.

Iroko has seen demand for residencies and more in-depth work shops grow over the past year. Funding from the Baring Foundation and London Borough Grants has enabled Iroko to conduct residencies in Hertfordshire, Bedfordshire and outer London. A millennium lottery grant resulted in a three-day residency for Newham leisure services, culminating in a masquerade involving young people living in the London borough.

While Iroko charges a fee for its performances and workshops, ranging from £200 for a one-hour performance to £1,750 for a week's residency, Oma-Pius says that the company needs to raise additional funds to be able to employ at least two full-time performers and ensure continuity and artistic development. Winning the Guardian award is a move towards this. Iroko plans to redesign its publicity and marketing in order to raise its profile. It hopes to work in geographical areas where access to minority ethnic music is limited. A forthcoming project funded by Yorkshire Arts to work with schools in Leeds is Iroko's first step in this direction.

(View the article at The Guardian web site)