This is a reproduction of an article that appeared in The Newham Mag in April 2007. 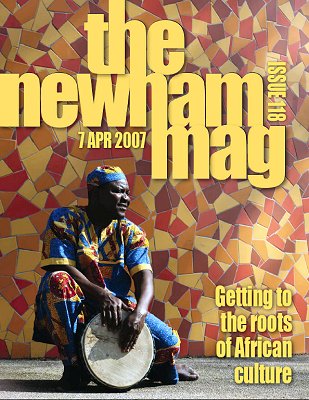 To West Africans the Iroko tree is filled with mythology and legend. Its roots go deep into the soil of Africa and it has the power to live forever. It is for this reason that Alex Oma-Pius chose the name Iroko for his theatre company.

"African culture isn't just about singing and dancing, there is a big part about story-telling," says Alex. "Children can see an African mask and won't know anything about it apart from it aesthetics. But there is usually a lot more to it than that."

The Iroko Theatre spends most of its time touring around schools, community centres and young offender institutions teaching African arts through performance and workshops.

"Generally when people look at African art, they see the dance and music, but it is not just about jumping up and dancing. My approach is that it is cultural entertainment, but we are educating children about African behaviour.

"We use African theatre as an instrument for raising self-esteem, team working and a platform for confidence. This is especially true for those who are of African parentage, whose culture they themselves don't have the confidence to see as part of their heritage.

"For children of non-African background it is an insight to a different culture. We are due to go on a tour of mining villages in County Durham and the Isle of Wight where there is not a lot of face-to-face contact with people from other cultures.

"When we go to see these places the teachers are jealous about Newham, the cultural mix and the community we have. I think that's why Newham children respond so well to the theatre."

Alex was brought up in Nigeria, where children learned their culture through the storytelling of myths and legends, something he wants to share with people of all backgrounds. 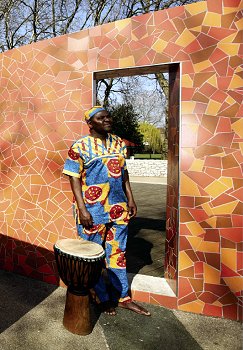 "In the evenings in Nigeria you would sit down and hear stories from parents, uncles and grandmas," says Alex. "That was our Nintendos and Playstations, our games were to sit down and listen to a good story.

"Then you would go and share that story with your friends at schools. You would say 'listen to this amazing story my grandmother told me'."

The Iroko Theatre was set up by Alex almost ten years ago and has been based in Newham for the past nine years. In this time it has been recognised for its important work with young people, and has received awards from The Guardian, Natwest Bank and the Mayor of London. Alex has recently become a fellow in the Royal Society of Arts, where he now sits on committees looking into youth behaviour.

"It was really inspiring to be recognised locally, says Alex. "Winning the Guardian Charity Award opened so many doors for us, the money was instrumental in bringing the charity to a new phase as we could revamp the website and produce lots of publicity material.

"It was very satisfying to have the recognition that it has made a difference to art in London. I didn't even know I was entered into it, I was very surprised."

With the tenth anniversary of the Iroko Theatre this September, Alex is hoping for a big performance at a local school where parents, teachers and pupils can all get involved. The stack of letters of praise and awards received is credit to what the theatre has achieved in the decade it has been operating. Just like the Iroko tree of Western Africa, the Iroko Theatre's spirit will live on for many years to come.