The impact of HIV and AIDS on a fictional African village was explored by a group of children in a play devised and staged by them. 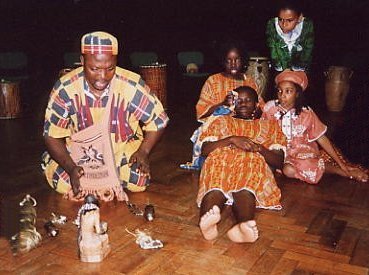 Youngsters involved in a course at the Hamilton Road Centre, West Ham, took just four days to rehearse the show featuring music and dance. They presented it to an audience of family and friends.

The 10 to 13-year-olds were guided by a group of professional actors, musicians and dancers from IROKOTheatre Company based in West Ham. The play was about a popular teenager who becomes unwell and is given a blood transfusion as part of her treatment. A few months later she learns she has contracted HIV from the transfusion. This then causes the villagers to shun her.

The aim of the play was to show that even if somebody has a disease, people shouldn't be scared of that person. They should try to help and be their friend. It doesn't change who that person is just because they are sick.

The youngster taking the lead role said "The play has given me the confidence to believe in myself and shown me that everyone should be treated with respect and as an equal". The storyteller in the play said "I told the audience about Anna having HIV. I also told the other villagers about the disease and was trying t explain to them that it's not as deadly as they think. "From taking part I have learned a lot more about my African culture and singing, dancing and drama".

Alex Oma-Pius, Artistic Director at IROKO, said: "I'm really pleased with all the children. I have noticed a great improvement in their development. "They have all become far more confident and by the end of the four days had really opened up. They all worked very hard on the play which was chosen and devised by them."